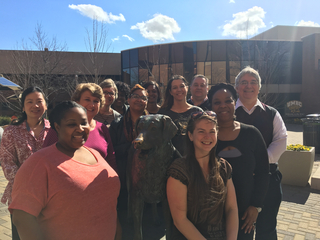 In late January 2016, Lisa Drouillard, Director of Payroll, and Lance Rand, Manager and Software Developer for DoIT’s Business Service Group, began meeting to streamline and digitize the contract renewal process. The renewal process is an important aspect for graduate assistants, part-time faculty, and contingent employees which previously involved multiple steps and forms to be completed by hand. Drouillard and Rand worked in unison to create and roll out eContract, a digital version of the renewal process, without a hitch.
Before eContract, service center employees would have to print, complete, and verify various forms by hand, then deliver them to the payroll office manually. After that, the payroll office would print the documentation, review it for incorrect information, and finally pass this along to be logged in the database.
The new system allows for many of these steps to be eliminated, freeing up much needed time and energy for both employees of payroll and campus service centers. Now, the entire process can be conducted digitally by receiving digital authorization from an approver or approvers, and then entering the information directly into the system.

Note: Screenshot shows a fictional employee and the interface for eContract.
Once employee information is entered into eContract, the system then checks the information for errors, eliminating any review work which was conducted prior by payroll. The new system has also improved turnaround time to about one day giving employees a longer window of time to complete their forms.

“By choosing the short, deep-dive, we constrained ourselves”

Drouillard and Rand not only helped streamline the contract renewal process, but also their meetings as well. Instead of having shorter meetings every week, their meetings consisted of three to four hour sessions.
As a result, Drouillard and Rand were able to quickly define the scope and requirements of the project, allowing them to have large blocks of time to sit and discuss their plans in depth.
“We were developing a new solution and as such, it could have 'wandered'. By choosing the short, deep-dive, we constrained ourselves.” said Rand.

“He’s technical; I’m functional, and we brought these two worlds together”

The result of the project spoke for itself, as it quickly reached completion in May of that same year. Drouillard provided her functional skill-set in order to outline all of the business processes and requirements for the system, and Rand then used his technical expertise to translate the requirements into specifications that an outside developer could use to begin crafting the system. “[I was the bridge] between Lisa’s functional expertise and the developers technical skill and experience,” Rand said.
“He’s technical; I’m functional; and we brought these two worlds together,” said Drouillard. This key partnership between the two helped keep the project together.

“...these transactions are usually being processed in high volume cycles, so this has eliminated some of that”

The new eContract system has key benefits to campus transactions from both the perspectives of the payroll office and the service centers. “The biggest savings that we have seen in the back office is that these transactions are usually being processed in high volume cycles, so this has eliminated some of that,” said Drouillard.
Before implementing the new system, the payroll office received an overload of volume right after the end of winter break, however the new system now alleviates that by providing a larger window which service center employees can use to submit these forms. Another benefit of digitizing the process is that the status of contracts in the queue is now visible for anyone in the process to view.

“...I think it made a big impact with them and we wanted to let them know that their voices were heard”

Feedback has been extremely positive and there have been very few issues thus far. With eContract being rolled out, Drouillard and Rand have improved efficiencies for numerous staff members, both in Payroll and in Shared Service Centers.  “They asked for this and we did it. I think it made a big impact with them and we wanted to let them know that their voices were heard,” said Drouillard.