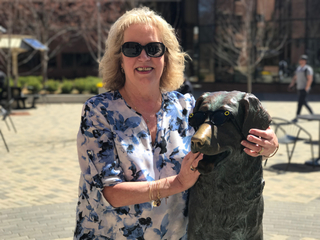 After 24 years at UMBC, Betty Blanchette, Software Developer for DoIT, is retiring. Blanchette not only leaves behind a varied career, but a positive impact on UMBC and the many people she has worked with.
“She takes on a task, she researches it deeply, she gets everything pulled together and makes it happen. You can always count on her to get the job done.” said Cheri Putro, Project Manager for DoIT.
Putro and Blanchette were both part of IT when it was two separate departments, academic and administrative. As UMBC continued to grow and expand, their group of IT would frequently move from building to building, even ending up in the basement of the library at one point, where the HP mainframes were located. They both would joke about how they had to fight off the geese at the time just to get to where they were going.
“She always maintained this wonderful sense of humor, and that's not always easy to do when you are under pressure.” said Putro, “I don’t think we could have made the conversion from HP to PeopleSoft without Betty, because [of] her institutional knowledge, we’re really going to miss that.”
Blanchette served as the Student Financials Technical Lead for the PeopleSoft SA implementation, where she was instrumental in ensuring UMBC’s students had accurate bills, 1098Ts, and overall provided a high level of support to Student Business Services (SBS).
Over the last few years Blanchette branched out beyond Student Financials and served as the SA Security Expert along with lending her support and knowledge to support all areas of Enrollment Management while still supporting SBS.
Before coming to UMBC, Blanchette was working for a company in Glen Burnie as a programmer. Her husband had spotted a job ad in the paper that UMBC was looking for programmers. Knowing nothing about the campus at the time, Blanchette decided to apply and interviewed with Putro and Joe Kirby, Assistant VP of DoIT. “I had never stayed at a place for more than three years, due to the whole contracting mentality” Blanchette said.

“Betty was instrumental in getting me through a lot of hurdles.”

Isabel Garrido, Assistant Director for SBS, remembers when she first came to UMBC and how Blanchette was very welcoming. “I came to this job after being away from the workforce so this was a real learning experience for me, and Betty was instrumental in getting me through a lot of hurdles.” said Garrido.
One of those hurdles happened to be ‘the crossover’, something that was referred to frequently but was completely unknown to Garrido at the time. Garrido would later learn that ‘the crossover’ referred to a migration of user data from one database to another.
“I finally cracked one day and asked about the crossover and where the information crosses over to and Betty said to me, ‘Well it’s not something where the information is dead and is going [somewhere else].’

“Betty was a vault of information in resources.”

Jean Bunche, Director of Special Projects for SBS, was always impressed with not only Blanchette’s dedication, but her resourcefulness after absorbing additional responsibilities. Bunche would worry if Blanchette would have any time for her, but Blanchette would always find time to work with Bunche.
“She never missed a beat,” said Bunche. “Betty is very responsive to your questions and if she doesn't know the answer, she will research it, she will dig, and she will get back to you. She doesn't just say ‘here's the answer’, she will help you learn.”
Bunche has worked with Blanchette for many years both in bringing up PeopleSoft and working on the legacy system. Bunche would sit down and discuss with Betty how they did something in the legacy system and how should they do it now.
“Betty was a vault of information in resources.” said Bunche.
Recalling some of the most memorable times she has experienced at UMBC, Blanchette reflected on all the community events and their importance. “I think it helps morale...the all staff meetings in IT help because you get to know other people. Keeping the community engaged is really important.” said Blanchette.