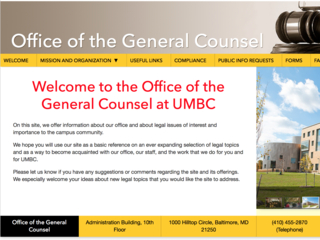 Brian Thompson, Assistant Dean of the Graduate School and an affiliate member of the Office of the General Counsel (OGC), had a problem. The 8 year old OGC website just wasn't doing its job of effectively providing information and establishing communication for visitors.
It wasn't until Joe Kirby, Assistant Vice President of Business Systems for DoIT, would soon introduce Thompson to all sorts of tools to use on the website. “The world we live in right now is self service,” Kirby said. “We can’t deliver fish anymore, we have to teach them how to fish.”
What needed to happen first was a new redesign, so Kirby suggested moving to the WordPress platform. This gave the OGC site a much needed refresh, as well as providing a more mobile friendly website.
After just a couple hours of tutorial, Thompson ended up redesigning the website himself and even added a new public info requests tab to the site. Information was further streamlined with contact information always at the bottom of any tab or page while navigating the site.
General counsel employees received their own tabs within the website, compared to the old website where all employees were just listed and lumped into one tab.
Next up was integrating BOX into the site. Thompson could now link to BOX files on the new site, and update these documents automatically without having to go back to the OGC website and update the links making it less of a hassle to manage.
Another addition was RT support in the form of electronic requests. Before, email requests for public info could get lost or would have multiple people working on the same request. By adding RT to the new OGC site, users could now simply fill out an online request form rather than sending an self-generated email to one or more of the legal counsel staff and it would be sent to the right person automatically, streamlining the whole process.
Thompson was able to experiment with a lot of different tools without worrying of breaking something somewhere else. “I think that what DoIT does, it creates an environment where you don’t have to be afraid of failure.” said Thompson.
One thing the old site didn't have was an RSS feed. “Let’s just say, the old site had a news tab that wasn't the most current,” said Thompson. “A RSS feed seemed like the perfect compromise.” The RSS feed is always accessible as it consistently appears on each of the tabs on the new general counsel website.
Overall, the entire experience of overhauling the site was great for experience. “Having an environment where you don’t have to worry about failure is very empowering.” said Thompson.
The partnership between DoIT and OGC lead to a practical solution of the necessary technologies to be implemented rather than applying the latest and greatest tools to a site. “We would like to let people know who aren't technical that they can do this.” said Kirby.
Tags: box bsg doit ogc rt wordpress
1 Comment (requires login)