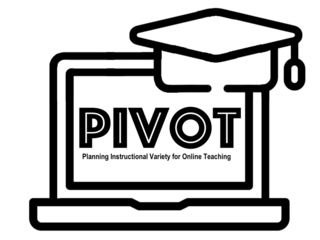 Based on higher than expected turnout for last week’s prototype of the Planning Instructional Technology for Online Teaching (PIVOT) Live webinars, DoIT is offering a monthly repeat of the five 60-minute webinars in five days approach on the following dates (up to 100 people can participate, but registration via myUMBC is required).

The PIVOT webinars will include the following topics:

As a reminder, last week’s webinars on these topics were recorded and available on the original announcement and DoIT’s Academic Continuity site (a PIVOT site is also under development). The recordings will also be paired with key instructional technology FAQs to form the basis of PIVOT Solo, which is designed as a totally asynchronous, self-paced to enable a more deliberate approach to online teaching than was the case in Spring 2020.

Last week’s turnout for the first prototype of the PIVOT webinars included the following:

As discipline-specific or cohort-based plans develop within Colleges, DoIT will use the PIVOT webinars & PIVOT Solo “playlists” to support such groups, which will inform the synchronous and asynchronous approach of PIVOT + that was previously announced.

In addition to new monthly offerings of PIVOT during the summer, DoIT’s Instructional Technology team has also announced focused training in Blackboard Essentials, Collaborate, Panopto, and VoiceThread, which were popular topics throughout the week. To learn more, visit DoIT’s training site at doit.umbc.edu/training.

As always, if you have any questions, please consider the following options: