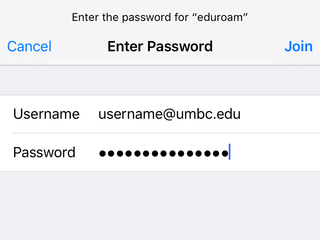 Eduroam is a global Wi-Fi network that provides encrypted traffic for any device you use and features a one time setup process that can be used on any campus that supports eduroam, not just UMBC. You can check out a video by the Eduroam community on an overview of how it works.  Eduroam is supported on Mac OS X, Windows, Linux, iOS, and Android.
Here are 3 reasons why you should be using eduroam instead of UMBC Campus:
1. Quick and easy: Damian Doyle, Director of Enterprise Infrastructure and Support, thinks eduroam is great for everyone. When asked about the main advantages, he said “eduroam can remember your login information allowing your device to automatically connect to the wireless network.” Setup for eduroam usually takes less than 5 minutes and once set up, your computer will automatically join to the network when on campus.
Remember when setting up to use your entire username, so instead of ‘damian’ in the username field, you would use damian@umbc.edu Example of logging into Eduroam on Mac OS X. Make sure to include the @umbc.edu part in the username field.
2. Security: Eduroam provides a higher level of security than conventional, unencrypted wireless. When using eduroam, all traffic between their devices and the wireless access point is encrypted using WPA2 providing another reason everyone should switch to eduroam sooner rather than later.
3. Availability: Originally developed in Europe, eduroam also supports people in higher education using wireless networks at other higher education institutions. Eduroam has expanded beyond the 1900 institutions using it in Europe to include over 30 countries such as Australia, Canada, and the United States. So any UMBC student, faculty or staff member traveling abroad can use their UMBC email address and password to access WiFi around the world. In Maryland, UMCP, Loyola, University of Baltimore, and JHU have implemented eduroam and you can use their WiFi when visiting those campus.

Connecting to eduroam is fairly straightforward, but if you require more assistance you can check out DoITs extensive FAQs on eduroam.