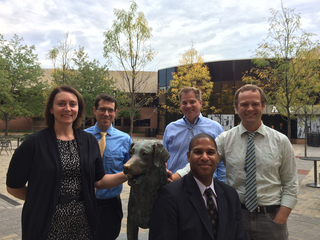 The Professional Staff Senate (PSS) represents the interests and concerns of the exempt staff at UMBC. The PSS certifies elections of members to committees as provided in the Plan of Organization and provides a forum for discussion and recommendations on matters involving exempt staff and the welfare of UMBC.
The PSS also reviews academic and administrative policy as it affects the exempt staff and  develops committees and acts within these committees as a vehicle to serve the membership. PSS members starting in the front are Stacy Long (left) and Kevin Joseph (right). Behind them are Damian Doyle, Arnold Foelster, and Tom Penniston (next to Kevin Joseph)
Stacy Long, Director, Admin Affairs & Research Admin Systems, started the first of her two terms for Spring 2016 this September.
Kevin Joseph, Director of Data Warehousing and Document Imaging, served 2 years on the PSS and is now serving as a representative of the Council of University System Staff (CUSS) on year one of a two year term. CUSS functions an informed advisory role in administrative areas and in the functional support aspects of academic matters. Kevin also received the Presidential Distinguished Staff Award in 2014.
Damian Doyle, Director of Enterprise Infrastructure and Support, is currently serving his first term as a senator for Spring 2016.
Arnold Foelster, Director of Enterprise Academic Systems, is serving his second year as a senator.
Tom Penniston, Specialist in Instructional Technology, is a CUSS representative who just started his Spring 2016 term.
While we can't say with certainty because it is has to find records going back that far, according to Jack Suess, this is the biggest group serving in PSS he can remember. Jack said, "I'm thrilled that so many DoIT staff are engaged in campus governance and working with other colleagues from across the university on issues of importance to the UMBC community."
Tags: bsg cuss doit pss
0 Comments (requires login)