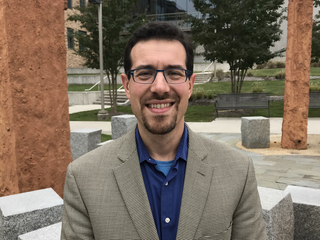 Doyle, assistant vice president of enterprise infrastructure in the Division of Information Technology (DoIT), is being recognized with Educause’s prestigious Rising Star award, “For demonstrating exemplary leadership in the implementation and deployment of information technology in support of the educational mission; for strong mentorship and promotion of diversity for those aspiring to the IT profession; for modeling collaborative partnerships within his institution and in the greater higher education community.”He’ll receive the award at the annual Educause Conference this week.

Like a number of DoIT staff, Doyle began his career as a student worker, and was hired full time after graduation (51 of DoIT’s 75 FT staff are UMBC alumni). Over time, he began taking on leadership roles in network service and security, technology to support classroom learning, and cloud services. Doyle’s collaborative, positive, and thoughtful approach extends beyond DoIT to his work across campus and beyond.

Doyle is a member of UMBC’s Center for Women in Information Technology (CWIT) internal board, and works closely with CWIT Scholars. He has developed an internship program for the scholars to receive hands-on experience in DoIT’s cybersecurity, UNIX infrastructure, and advanced networking teams. Doyle is also committed to working in shared governance and is currently president of the university’s Professional Staff Senate (PSS) and active with its University Steering Committee (USC). He is chair of the planning committee for Maryland’s First Lego League (FLL) and is one of the state head referees. He also coaches his son’s school FLL team.

“Damian has been a partner with the Center for Women in Technology (CWIT) as an advocate for women and underrepresented students, educator, supervisor to CWIT students, and ally within the University of Maryland, Baltimore County,” says Erica D’Eramo, assistant director of CWIT. “He has promoted the opportunities for employment and technical experience in DoIT, and he participates in professional development exercises with new CWIT students and multiple networking opportunities throughout the year for all class years. We greatly appreciate his support of CWIT's mission and thoughtful collaborations for the past several years.”

DoIT Vice President and CIO Jack Suess, B.S. ‘81 mathematics, and M.S. ‘94, information systems operations analysis, says, “I am thrilled that the EDUCAUSE Awards Committee agreed that Damian's body of work was exceptional and that he was awarded the Rising Star Award. Damian’s technical and managerial leadership has not only advanced IT at UMBC; he’s taken that leadership and talent to work across campus and in the community, and he is seen as a national leader in the field, especially in the use of cloud technology.”

“I love building bridges,” Doyle explains. “I’m able to work with people on campus and learn what they are doing, then find and match technology to that, in order to help make their work better.

“IT staff see themselves as partners with the university community and so we’re committed to intentional customer service. It’s important to take time with people, to hear their viewpoints and understand their needs. If we’re going to change how we do something, it has to be because it’s of benefit, not just because it’s cool technology.

We’re at a point where you can’t teach and learn without technology, so we have to implement it in a way that serves the community.”

Doyle has also helped DoIT create a culture that is inclusive and welcoming too. Beyond his work with CWIT, Doyle says it’s been important for DoIT keep in mind the wide range of ways people from all backgrounds bring different perspectives on problems and solutions to their work. “I feel we have good values around this, but we want to make sure students understand and have that in an intentional way.” He says DoIT will continue to work on developing this area, and they are planning to launch some new initiatives this spring.

When he’s not at UMBC, Doyle takes time away from IT, playing ultimate frisbee and tennis, running, and biking. But he also loves science fiction and video games, which he often plays with his son, Leo, who shares his love of technology. Doyle, whose parents were part of UMBC’s first graduating class, now enjoys this time with Leo much like he did as a child when he and his father built computers together. He says he explains to his son that using technology and understanding how it works are two different things. That understanding has not only helped Doyle in his career, but has become part of a philosophy that has made a difference to the UMBC community as well.

In an interview with Educause Review, Doyle shared what keeps him inspired. “The people within higher education and their stories, passions, and dreams have a huge impact every day on my thinking and motivation. I’m continually impressed by the challenges many students have overcome to get where they are, and by the faculty, staff, and colleagues who are changing lives through their work, their research, and their commitment to education. The more people I talk with, learn from, and connect with, the more inspired I am to help them succeed and achieve their goals.”