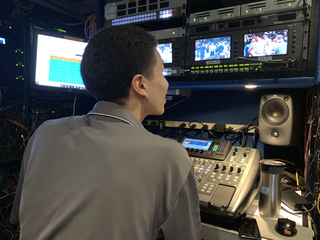 While it’s not the same as attending in person, if you enjoy watching UMBC basketball or Commencement live online, soon you might also be able to watch other major campus events in the same way. In addition, like many of UMBC’s ESPN+ broadcasts now, most of the production crews will likely be staffed by UMBC students and young alums.

Through a competitive procurement process facilitated by UMBC Procurement & Strategic Sourcing over the summer, the University recently selected VPC, Inc. of Reisterstown, Maryland, to provide high definition (HD), live stream broadcast capabilities across campus. Over the past three years, the firm had partnered with UMBC Athletics, DoIT and Media & Communications Studies (MCS) to provide video production services, primarily for the broadcast of basketball games on ESPN+. UMBC Athletics and DoIT collaborated to solicit a partner with a shared strategic vision to expand live streaming beyond athletics, and continue the strong participation of UMBC students and young alums as production crew staff. The initial contract term with VPC, Inc. --  to be coordinated through DoIT’s New Media Studio -- is for three years, with optional renewals for up to an additional five years.

“VPC has been a strong campus partner for many years, having produced numerous commencements, alumni awards, anniversary celebrations and athletics events,” says Jack Suess, Vice President of IT and Chief Information Officer (CIO). “We’re especially pleased to work with a partner so committed to higher education and training our students to work alongside industry professionals in live stream broadcasting.”

In addition to producing UMBC’s ESPN3 broadcasts, VPC, Inc. has provided production services for marquee events such as the AFL Arena Bowl, the Olympics, and the Kentucky Derby. VPC provides scoreboard production and engineering services for the United States Naval Academy and 3 NFL teams including the Ravens. In recent years, the firm has also “crossed over” into college and university commencements, capital campaign launches and alumni awards including involvement for the UMBC50 Celebration. Today, the firm routinely produces more than 250 events a year, with over 100 of them in live sports production. The University’s new contractual agreement with VPC also complements DoIT’s 2017 upgrade of the New Media Studio  to HD.

“We couldn’t be happier to continue the campus partnership with UMBC,” says Eli Eisenberg, CEO of VPC, and a 1986 UMBC alum. “We’ve enjoyed working with Athletics and look forward to continue doing so under the relationship with DoIT for other major campus events. Regardless of the event or venue, our professional staff really enjoys working with students, and helping them grow their skillsets."

To learn more about the new HD live stream capabilities or to discuss a potential project, contact Dustin Roddy, manager of the New Media Studio, at 410.455.3214 or drod2@umbc.edu.
Tags: success
0 Comments (requires login)