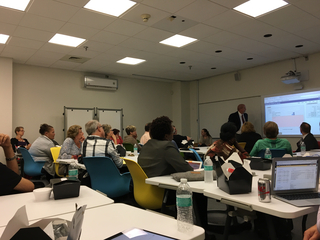 In early October, the Request Tracker (RT) users group met in the newly renovated Engineering Room 023 for an informative session on RT’s upcoming features and overall integration within UMBC. Over 35 people from various departments attended the lunch and learn and an effective practices interactive panel provided key insight into RT’s best uses.
The panel consisted of Kena Jackson of Enrollment Management, Shahid Mokal from the College of Arts, Humanities, and Social Sciences (CAHSS), Ken Schreihofer from Student Affairs, and Brian Thompson from the Office of General Counsel (OGC).
Starting off the session, Joe Kirby, Assistant VP of DoIT, gave a brief overview of upcoming features for RT version 4.4. The new version will offer selectable multiple files, drag and drop attachments, and inline previews for certain file types like images. For a complete list of upcoming changes, check out the release notes here. Image shows Joe Kirby, Assistant VP of DoIT, walking the RT users group through the upcoming features of RT version 4.4
Andrea Mocko then gave a presentation on campus use of RT based on the FY 16 User Support. In short, the department of Academic Affairs has the highest use of RT by division and the top referring sites and the volume of TSC phone calls has gone down significantly. For a more complete picture, you can check out the FY 16 Review here.

“There would be people stopping at the desk for on the cuff technical support.”

The panel then went through what it was like implementing RT into their respective departments, starting with what the initial problem was before implementing RT.
Jackson described life before RT as challenging and the inability to keep track of everything was not ideal with their goal of providing excellent customer service. “There would be people stopping at the desk for on the cuff technical support.” said Jackson. Image shows Andrea Mocko, head of the TSC, giving a brief overview of campus support with RT
Shahid had similar problems to Jackson. Schreihofer ran into workflow problems, and wanted to be consistent and automated every time when responding to a ticket. Thompson had no central way of receiving or tracking incoming tickets.
These were all major issues the panelists described, until they remedied it by implementing RT into their departments.
RT will be 8 years old on February 23, 2017. Kirby said “I have realized over the years it was not me getting [users] to buy in, but rather [users] sharing their needs and willingness to work with us.”

“RT does all the heavy lifting, and gets it done.”

You can see this type of collaboration with all of the panelists who attended the lunch and learn. Each one of them found ways to integrate RT into their department, and customize it to suit their needs.
Schreihofer for example looked into canned responses for web forms, which would then go on to be implemented in the Technology Support Center (TSC). “RT does all the heavy lifting, and gets it done.” said Schreihofer

Thompson implemented RT as a way to replace paper processes within his department as well as improving workflow within the OGC. You can check out more about Thompson’s implementations here. After implementing RT, Thompson says he gets several questions from institutions outside of UMBC. “Other Universities point to what we have and say ‘I want that’” said Thompson.
One of Kirby’s favorite quotes that describes RT and implementing it at UMBC comes from computer scientist and Navy Rear Admiral Grace Hopper, who said “The most dangerous phrase in our language is ‘We’ve always done it that way.’”
For more about RT and upcoming users group meetings, you can follow the myUMBC RT group here.  Contact Joe Kirby to talk about implementing RT in your department.
You can also view a quick 3 minute video on new features coming to RT here.
Be sure to check out DoIT’s extensive FAQs on RT here
Tags: bsg cahss ogc rt users
0 Comments (requires login)