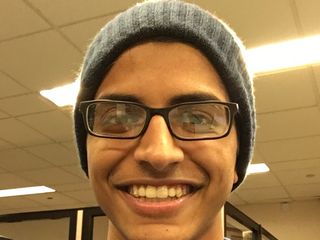 Located on the first floor of the Albin O. Kuhn Library & Gallery, The Technology Support Center (TSC) is the first stop in assisting the UMBC community with technology questions and requests. The TSC is made possible thanks to its many student workers, like Saiful Islam, a senior Mechanical Engineering major.
Two years ago, Islam was sent a link to apply to the TSC through UMBCworks. Throughout high school, he had many experiences with technology with the classes he took. He is also tier 1 tech support for his family. “I’m just good with computers,” Islam said. “Any time family had computer issues they came to me.”

Islam also happens to be a Senior Consultant at the TSC. Most of the days at the TSC consist of just answering calls and logging tickets, but additionally he is in charge of training new employees.
While at work, it’s not simply just a solo effort. It’s a team effort between students, “We are always just asking each other and we help each other out” said Islam.

“...the longer you stay on the less these things bother you.”

When he first started out at the TSC, he was nervous. The TSC handles phone calls from inside and outside the UMBC community. Over time, it got better and now it’s second nature to Islam.
“I never had a job where I had to talk to someone on the phone. It’s kinda hard initially, the longer you stay on the less these things bother you.” said Islam.
There are a variety of calls that come into the TSC, which the students are all equipped to handle. New students needing help setting up their accounts, people needing help getting online, or anyone experiencing network issues, the TSC can handle. “There are some calls that are beyond what we do, but most of the calls [we get] is stuff we can do.” said Islam. Things like hardware related issues are just some of the things the TSC can’t do.
When not at work, Islam likes playing video games, playing soccer or just spending a ton of time binging Netflix. In the past two years, one of his favorite things about working at the TSC is the fellow students he has met. “I’ve met a lot of people through the TSC who are co-workers at first but have become good friends [later on].”
Interested in working at the TSC? Follow the DoIT group on myUMBC for job postings and updates.
SaveSave
Tags: doit student tsc worker
0 Comments (requires login)