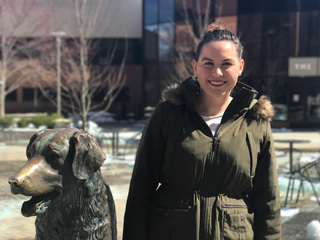 The Technology Support Center (TSC) is the first stop in assisting the UMBC community with technology questions and requests. The TSC is made possible thanks to its many student workers, who all have a unique background. Take Lily Prokop for instance, a sophomore majoring in Music Education & Music Performance.
Like many, Prokop applied to the TSC through UMBCworks. Prior to the TSC, she did not have any firsthand knowledge on IT support. “I’ve been working for the TSC for about a year,” said Prokop. “But when I first started, I had no idea what was going on. I was so nervous at answering phones.”
Prokop was determined to change that. She had the drive to get over her nervousness by wanting to answer every phone call that came in. By doing so, she was able to get it down to a point where she didn't have to follow a script or go step-by-step on certain tasks.

While not working at the TSC, Prokop enjoys playing music and can play six different instruments. Her favorite one, however, is the oboe. Before high school, she was a big fan of the clarinet but did not know about the oboe. After seeing someone in high school play an oboe, Prokop was inspired her to learn to play it.
“I knew playing oboe would also give me an advantage when applying to music schools [and] college because there aren't many oboe players.” said Prokop.
Those advantages would become apparent. Prokop would be invited to perform as a guest at Carnegie Hall for the Chesapeake Youth Symphony Orchestra (CYSO) and plays wedding gigs in the summer.

“It felt exhilarating to literally watch the sunset as we played…”

For Prokop, performing indoors is usually standard, with only a small handful of opportunities to play outside. That changed when Prokop performed at UMBC’s 50th anniversary with the rest of the UMBC orchestra outside. “I was so proud to represent UMBC,” said Prokop. “It felt exhilarating to literally watch the sunset as we played...playing in that setting to honor UMBC was really wonderful.”
While being a full time student and musical performer, Prokop is also a proud member of Alpha Sigma Alpha, where she participates in fundraisers and other philanthropy efforts. Last semester, Prokop participated in Hula Hoop for Hope. During Hula Hoop for Hope, members all take turns hula hooping for 12 hours. She has also become their main line for tech support as well. “I end up answering people’s tech questions in our group chat.” said Prokop.
Working at the TSC has been a great experience for Prokop, but it’s not a solo effort by any means. It’s a team effort that helps create a welcoming and productive work environment. “The people who work here are pretty cool,” said Prokop. “When customers are walking into the TSC, and there's an issue, I know someone I’m working with will know how to solve something.”

After the TSC, Prokop wants to become a music teacher in Baltimore City. When looking back at her time spent so far at the TSC, Prokop reflects on it being a positive learning experience.
“People are often surprised when they find out I'm a music major who works within DoIT. The TSC has not only given me versatile work experience, but it has also given me confidence in my knowledge of general technology and customer service skills.” said Prokop.
Interested in working at the TSC? Follow the DoIT myUMBC group for job postings and additional news and updates.
Like this story? Read about senior technology consultant Saiful Islam and his two years at the TSC.
Tags: doit student tsc
0 Comments (requires login)